Marriage through the years

Marriage is as old as civilization itself, but it is a tradition subject to changes in time, culture and trends in society. Here we look at the evolution of marriage through the ages:

Marriage in ancient times was a process that evolved for the safety of breeding, security, protection of important bloodlines and the issue of property rights. One ancient Hebrew law required that a man must marry his deceased brother’s widow. However, even in ancient times, marriage wasn’t all about heartless bloodlines and property rights. Love was still a reason to marry, and the eternal symbol of the wedding ring dates back to Roman times. The reason it has always been worn on the left hand is that it was believed a nerve ran straight from the ring finger to the heart. Many of our current romantic wedding traditions have their roots in ancient practices.

For example, newly-wed couples drank a brew made from honey during specific lunar phases to increase fertility. This is where we get the term ‘honeymoon’.

Marriage differed greatly between cultures, with some believing in marriage to more than one woman. It was the Roman Empire that put an end to the practice of polygamy and their views that were adopted by most of the Western world. Polygamy was outlawed towards the end of the Roman’s domination and laws were passed against adultery in a monogamous relationship. 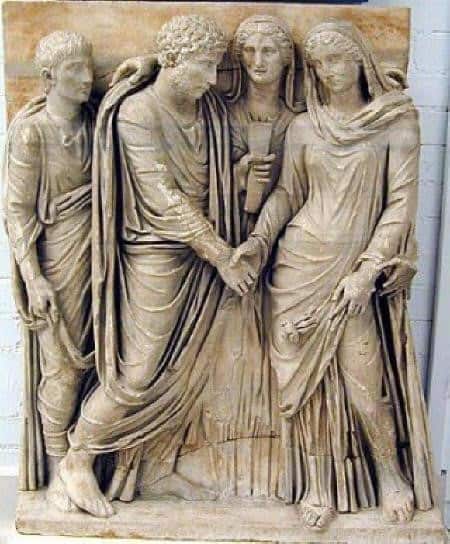 In Europe, marriage was primarily viewed as a civil institution until the Christian Church began to show interest in the ceremony. Around 5AD, Christians began to have marriages conducted by ministers, but it wasn’t until the 12th century that the Catholic Church made marriage a sacrament sanctioned by God.

Romance blossomed during the Victorian era with courtship rituals becoming very formal. A man had to wait to be formally introduced to a woman, he couldn’t simply speak to her. If a gentleman wanted to walk a lady home, he had to present her with his card. At the end of an evening, a lady would choose her escort by returning her card to him! Courting would only take place in the parent’s home and it was almost unheard of for couples to be alone together without a chaperone. Even marriage proposals were formally written and addressed to the parents.  This is so different to what happens now with meeting someone, then dating, buying a house, getting married, buying a car, having children and growing old together.  There are also lots of commitments to think of like mortgage, phone bills and making sure your house is safe and you both have a key to get in.  You could always contact a Dublin Locksmith company to aid you with this at links like locksafe.ie.

Divorce also has its roots in ancient civilization. The ancient Greeks were fairly relaxed over the issue, although the request had to be placed before a magistrate to decide if the reasons were valid. Divorce was rare in Roman society, but as the empire expanded, civil law did allow a man or woman to renounce a marriage at will.

Christianity began frowning upon such practices, with the only way to receive a divorce being upon annulment of the marriage as granted by the Church.

If you know your British history, then you’ll know that one king changed all this forever.  The most famous divorce in history occurred when Henry VIII decided he wanted rid of Catherine of Aragon. His desire to wed Anne Boleyn led to England disconnecting from the Roman Catholic Church forever, changing the course of history and creating the Church of England.