What will it be? The home bar is open.

Was there ever a better addition to a 70’s house than that of the home bar? Why bother going to the oub when your husband could serve you a nice uniced Gin and Tonci from behind a red velvet covered bit of plywood with a could of shelves for glasses behind it. As a 70’s child this held a pleathora of secerts and mystery to the author. None of those mysterys ever being answered fully enough to justify why they had one. In these enlightend times one need only contact https://www.elliottgeorgebars.co.uk/ as they are the Leicester Mobile Bar Hire specialsits and they will come to you rather than you risk the wrath of the household by rocking up with your own. 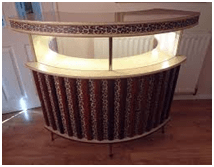 See that monstrosity above? That’s the sort of thing I’m talking about. I was tempted to go back through my old family photos to see if I could recover the one that my parents friends owned. There are though a few details missing and it’s a shame I can’t provide you more photos of the  hell that one was put through. Let us first discuss the décor. See that leopard skin? That was a fun theme, “Oo, it’s like an African bar after a safari,” says the Solihull housewife when her husband Alan brings it home. Think Abigail’s Party and you’re on the right lines. The other favourites were a red leather padded option or one with bamboo in to give the impression of the kon-tiki look. Behind everyone of them was a raffia poster of where they had been on holiday that year. If it was Spain it was a bullfight advert and if it was Greece it was the Temple to Athena.  This was the start of affordable package tours abroad, for some at least, so we, who still had to do with 2 weeks in Paignton, saw a brief view of how the other half lived.

What else could we expect to find on the 70’s home bar. Ah yes, lets add a bit of colour with a Pineapple shape ice bucket especially good is you’ve got the Kon-Tiki look, though the only exotic thing that’s coming out of the place is a Pina Colada. If you’ve not got one just use the Johnnie Walker or Grants one that you nicked form the pub, along with the glass ash trays. If you’ve really pushed the boat out, you’ll have the pineapple glasses as well. What drinks can we expect to see? Well, you’re more than likely going to end up with a warm Watneys party 7 pint or maybe the host will be able to unstick the Cointreau they bought for Christmas 1973. Or the Bols Advocaat that they think you have lemonade with but can’t be sure. There be some Martini Bianco and Rosso, so were on safer ground there and there is bound to be some Croft Original sherry too. Whatever happens, you’re going to end up with Babycham. Don’t question it just drink it. Nostalgia eh?