If you want to increase your strength and gain more muscle mass, stop lifting slowly!

You enter the gym and you see that most of the subjects who are training strength, almost all with the objective of gaining muscle mass (hypertrophy), work the concentric phase in the different exercises, in addition to the eccentric phase, slowly, concentrating the movement because according to them that “congests” more muscle and feel that they work more and it will bring more benefits. 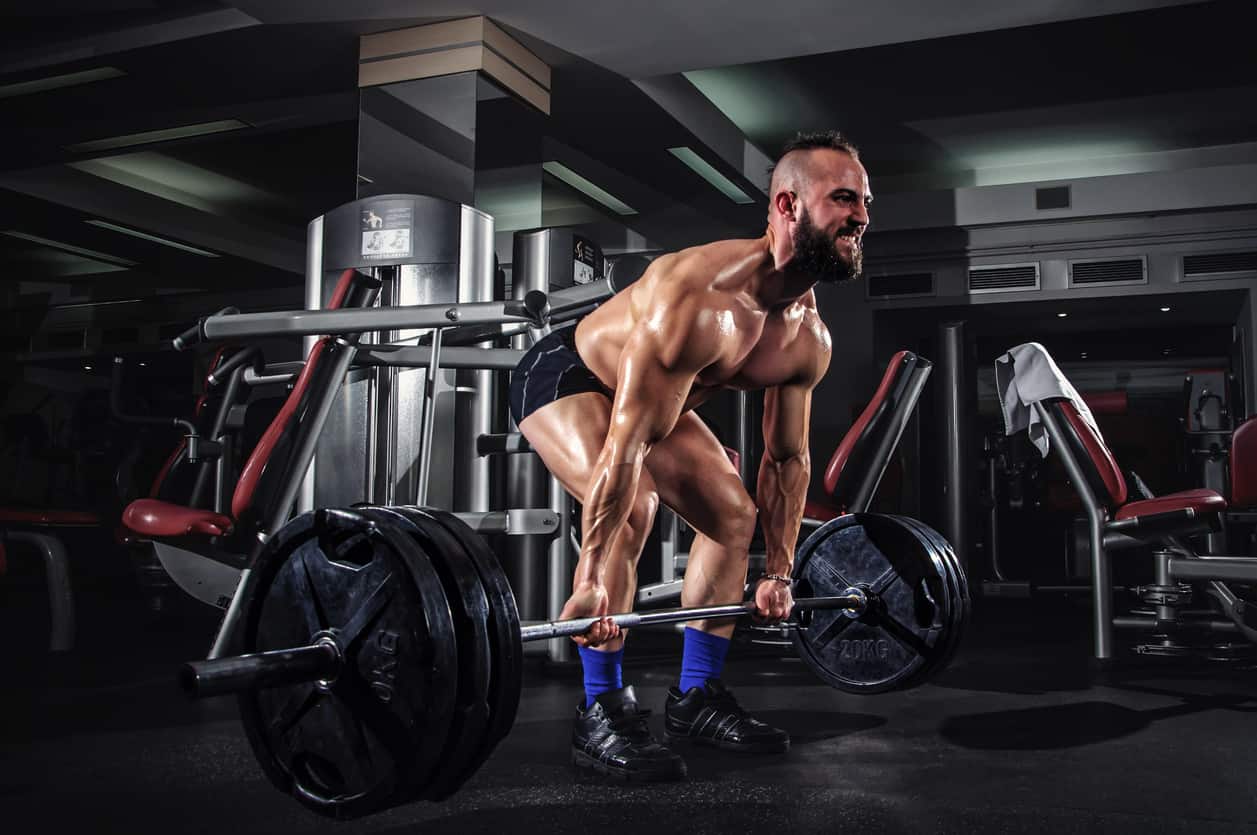 I will explain, of course based on the scientific evidence, how all these subjects are wrong, and why we should train the force performing the concentric phase at maximum intentional speed if our goal is to increase strength and muscle mass.

The speed of movement is another variable that we should consider

The effectiveness of a strength training program depends on the application of adequate training loads, which is related to the proper management of training variables such as intensity, volume and frequency, among others.

The manipulation of the acute variables of strength training (load, number of series and repetitions, type of exercise and order , duration of breaks, etc.) shapes the stimulus of the exercise and determines the magnitude, the type of physiological responses and the adaptations as a consequence of said training.

Well, the speed of movement , which is dependent on both the magnitude of the load and the voluntary attempt of the subject to move that load, is another variable that influences the adaptations resulting from strength training, but has not been given the importance that it truly requires.

Previous considerations regarding strength and hypertrophy

One of the tests of the role played by neural mechanisms in training is that the proportion in the improvement of strength is often higher than what could be expected by the exclusive effect of changes in muscle mass.

It has been reported in different studies that the increase in the cross-sectional area of ​​the entire muscle (hypertrophy) and in the individual muscle fibers is only a quarter of the increase in force generated in a maximum voluntary contraction (neural adaptations vs. hypertrophic adaptations).

Even increases in strength of 200% have been observed in some exercises without significant increase in the size of any type of fibers.

It is considered that the improvement of the force by the neural activitydepends on the increase of the nervous activation, the optimal synchronization of motor units and the joint activation of different muscle groups.

The aim of the training with respect to these mechanisms is to improve the neural processes , which are expressed by the following adaptations: recruitment, frequency of stimuli, synchronization, reflex activation of the muscle, reduction of inhibitory mechanisms of maximum muscular tension and optimization of intermuscular coordination (coordinated and effective activation of agonist, antagonist and synergist muscles).

Well, if we want to obtain the greatest benefits of strength and hypertrophy, performing the concentric phase of the exercises at maximum intentional speed is absolutely essential.

Whatever the load (lighter or heavier), our intention must be to move it at the maximum possible speed, always talking about the concentric phase

That is, we must move the load with which we are training as fast as possible during the concentric phase of the exercise (always with a correct technique). This is key and the scientific evidence supports it.

We refer to our intention , that is, whatever the load (lighter or heavier), our intention must be to move it to the maximum possible speed, always talking about the concentric phase.

When this load is close to the 1RM (maximum repetition), it is obvious that either I lift it at the maximum intentional speed or I simply can not lift it. But this intention to lift at the maximum possible speed we must apply it whatever our burden if we want to obtain greater benefits.

It is a complete error and a very established mania to train slowly (intentionally slow speed) and people are not aware that this way they do not get more benefits.

A recent study has compared the effect on strength gains of two bench press exercise strength training programs that only differed in concentric speed : one group performed the concentric phase of exercise at intentional maximum speed versus another group that it was performed at half the maximum speed (intentional minor speed), the speed of the repetitions being controlled by the use of a linear speed transducer.

This same protocol has been used with the full squatexercise in another recent study , with similar results of greater strength gains , velocity developed with any load and vertical jump (CMJ) in the groups that perform the concentric phase of the exercise at maximum speed intentional.

In turn, a systematic review and meta-analysis(highest degree of evidence) published this year 2017 has reported that with rapid strength training(concentric phase at maximum intentional speed) performed at moderate intensities between 60% and 79% of the maximum repetition (intensity very typical of training oriented to hypertrophy) greater strength gains are obtained than with strength training performed at moderate and slow speeds.

Undoubtedly, the speed of movement can be considered a fundamental component of the intensity of strength training, since for a given percentage of the 1RM, the speed at which loads rise determines to a large extent the resulting training effect and, undoubtedly, strength gains can be maximized when repetitions are performed at a maximum intentional concentric speed .

Okay, I raise at full intentional concentric speed to increase my strength more, but what about hypertrophy?

There is no doubt that performing the concentric phase of the exercises at a maximum intentional speed promotes greater gains in strength. But some of you can tell me: “I do not care so much about strength but to gain muscle mass”.

The answer will be the same: “perform the concentric phase of the exercises at maximum intentional speed”.

Each percentage of the 1RM (maximum repetition) has its own maximum speed and it is the intention to reach that speed which is going to make us progress.

The fact that you do your hypertrophy training with a concentric speed slower than the speed that that load would have (you do not perform it at the maximum possible speed) is not going to be a benefit. Let’s justify it.

If you want to recruit type II fibers (fast), which are the most hypertrophic capacity, you must perform the concentric phase in your exercises at maximum intentional speed

When all the fibers of a mixed muscle (with slow and fast fibers) contract, the slow fibers contribute almost to the same extent as the fast ones in the production of power at very slow speeds, but only very little at moderate speeds and nothing in absolute at high speeds .

Well, when you train hard and perform the concentric phase of your exercises slowly (intentionally) by the supposed “increased congestion” and more benefits, are recruiting more type I fibers (slow twitch fibers), which means that no you are recruiting type II (fast) fibers, which are those that have the most capacity for hypertrophy.

If you want to recruit type II fibers (fast), which as I said you are interested because they are the most hypertrophic capacity, you must perform the concentric phase in your exercises at maximum intentional speed .

The effect of the activation frequency on the force developed by a motor unit is fundamental to determine the mechanical impulse generated by the muscle fibers.

When stimuli for muscular contraction are applied at different frequencies, it is observed that the speed with which muscular strength increases depends on the frequency.

Well, at the level of motor units, with your slow training you are downloading at low frequency instead of at high frequency. These motor units must discharge as often as possible , and for this you must perform the concentric phase of your exercises at maximum intentional speed (move that load at maximum speed).

That is, in your hypertrophy training you usually work with submaximal loads(typical of 8 to 12 repetitions per series) and slowly, performed with a speed that is associated with a greater load, it is clear to you that you are not taking advantage of it to those burdens and that you are not going to get bigger improvements, but that you are limiting your progress.

What interests me is that the load with which I work gives me everything that this load can bring me , and for that I must move it to the maximum intentional concentric speed (maximum possible speed).

What interests me is that the load with which I work gives me everything that this load can bring me, and for that I must displace it at the maximum intentional concentric speed

And what about the time under tension?

However, it is known that time under tension can be an important variable for hypertrophy (not as I have commented to improve strength, which is more at the neural level).

Even so, this does not mean that the concentric phase must always be carried out at the maximum intentional speed. The more time under tension I will work in other ways , either adding more series or repetitions to my exercises, adding some more exercise to my training, etc.

Another very typical way would be to make the eccentric phase a bit slower , but it is advisable to perform this phase simply in a controlled manner, since prolonging the eccentric phase is not going to have more effect on the hypertrophy, and it will cause more stiffness and a worse and slower recovery in the face of your next training.

Also, that very slow eccentric phase will fatigue you more and you will not be able to take full advantage of the concentric phase at maximum speed due to fatigue, which will also not allow you to add more work in order to improve your strength and hypertrophy.

In conclusion (I know I am being tired but I want to be clear), I must make the most of the concentric phase of each repetition in my exercises, both to increase my strength and to gain muscle mass , and for that I must perform this phase concentric at maximum intentional speed , always with an adequate technique, of course.